On 03 February 2018, Islamic Cooperation Youth Forum (ICYF) co-hosted with Lighthouse Foundation the 1st National Model OIC Bangladesh in Dhaka, Bangladesh. The Conference was held as an official youth event of the 10th Islamic Conference of Tourism Ministers from OIC Member States. The Ministry of Youth and Sports of Bangladesh Government was also in collaboration with this conference. The agenda and theme of the conference was similar to that of the 10th ICTM, with an emphasis on youth issues.

The first pre-meeting youth event as part of an OIC sectorial meeting was attended by 110 students from 12 different nationalities who discussed the roadmap and strategies on promoting intra-OIC tourism. The Conference ended with an 11-point proposed action plan which formed part of the presentation of ICYF to the 10th ICTM.

The national host organization, Lighthouse Imperium Foundation along with the entire team thanked the co-organizer ICYF for the cooperation and support to make this platform a reality. The Ministry representatives from of Youth and Sports and Foreign Affairs also expressed their positive notes on this program by wishing the expression of interest to host such youth programs in the coming days to further mobilize and engage youth potential. 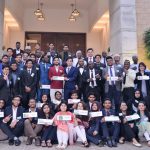